Teaching the Olympic Sport of Fencing

The 2019 Belfast Open was held on Saturday 9th and Sunday 10th of March 2019 at Belfast Fencing Club’s venue at Sullivan Upper School in Holywood. As in previous years, it consisted of a senior event with men’s and women’s epee, foil and sabre, as well as the 5th round of the 2018/19 NI Junior Foil Series. A total of 115 fencers from all over Ireland attended, 72 senior and 43 junior.

The 2019 BO began on the Saturday morning with the N Ireland Junior Foil Series U16s, boys and girls. In the boys’ category Claudio Sosa Smatrala (Pembroke) won gold without losing a fight, beating NIJFS newcomer Long Yeung (Belfast) in the final 15-8, and the age group points leader, James Moriarty-Smyth in their semi. In the girls U16s Victoria Morris (Sullivan Upper) returned to competition from a wrist injury to defeat clubmate Izzy Evans (Sullivan Upper) 15-9 in the final, both fencers having defeated fellow Sullivan fencers in the semis (Angharad King and Rachel McKillen).

Alice Peardon (Pembroke) took her third win of the year in the U14 Girls, defeating Alex Atkinson (Sullivan Upper) in the final and Abbie Morgan (Hunterhouse) in her semi-final, Alex having beaten fellow Sullivan fencer Charlie Beimers in the other semi. Eoghan O’Hanluain (Pembroke) took his first win of the year in the U14 Boys after knocking out Alexander Penny (Sullivan Upper) in his semi-final, then beating Szymon Turkiewicz (FLO) 15-11 in the final. Szymon had just previously knocked out the age group points leader, Luke Sherlock (Pembroke) in the other semi.

In the U12 Boys Myles Moriarty-Smyth (Pembroke) won his 4th gold medal of the year and James Huang (FLO) his 4th silver, Myles taking the final 10-5. James defeated FLO clubmate Conaill Taggart in one semi, while Myles beat his Pembroke clubmate Matthew Sherlock in the other. There were only 3 entrants to the U12 Girls, so were combined with the boys for the poule round, then placed in a fence-off for the medals. This resulted in Sophia Cahill (Sullivan Upper) defeating Emma-Lee Elwood (Hunterhouse), then being beaten by fellow Sullivan fencer Alexandra Ong in the final 10-8.

Erika Sanvito (Pembroke) and Kirsty McMullan faced each other in the final of the U10 Mixed category for the third time this year, Erika taking the win this time 10-8. Erin McAlister-Colacio (FLO) and Tommy Fitzpatrick (Pembroke) took the 3rd place medals.

The epee events ran on the Saturday afternoon, starting with the men’s competition. Duncan Salter (Brian Boru) and David Burnside (Northampton) both emerged from the 2 poule rounds having dropped only one fight each, with Duncan taking the top seed position with 11 wins from 12 and David taking 2nd with 9 from 10. Jonathan Burnside (Magee), Dawid Kulka (Brian Boru) and Paddy Brennan (Pembroke) filled positions 3, 4 and 5, all having dropped 2 fights each. The top 4 seeds all made it through to the semi-finals, with Paddy, Colm Casserly (UCD), Alastair Houldsworth (Belfast) and Sean Ryan (UCD/PBAI) filling final positions 5 to 8 respectively. In the 1st semi Dawid beat Duncan 15-12, while in the 2nd, David Burnside defeated his brother Jonathan 15-7. In the Burnside – Kulka final Dawid pulled out an early 8-4 lead, with David then coming back to level at 9-9. Period one finished 11-10 to Dawid, but in period 2 David strung together a series of winning hits to take victory 15-12. 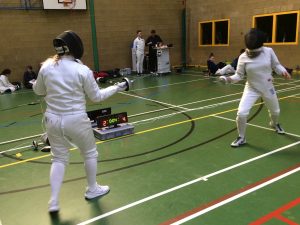 After the poules, Katie Gillespie (QUB) and Camille Hindsgaul (DUFC) both topped the seedings with 9 wins from 10, Katie taking the no.1 spot over Camille on indicators. However, Katie was then knocked out in a close-run semi-final bout 6-7 with the 4th seed Alisha Mullen (UCD). In the other semi, Camille defeated 3rd seed Isabelle Clarke (Brian Boru) 15-8, then went on to win in the final against Alisha 15-8.

Sunday’s events began at 0930 with the mens foil. Daniel Sigurdsson (FLO) was alone in finishing the 2 rounds of poules without losing a fight, thus taking the no. 1 seed position.  Claudio Sosa Smatrala (Pembroke) and Alastair Houldsworth (Belfast), both having lost only one fight, filled the 2nd and 3rd seed positions, Claudio having the better indicator. These three all made it safely to the semi-final stage along with 5th seed Finn McMullan, who had knocked out the 4th seed Michael Thompson (QUB) in the quarters 15-12. In the first semi, Daniel had a convincing 15-4 win over Finn, while in the other semi Claudio defeated Alastair 15-7. In the final Daniel established a lead and held it to end the first period 6-4 up, then extended his lead to 9-4 in the second. Claudio then won 4 consecutive hits to almost level the score at 9-8 at the end of the 2nd period. In the final period Daniel regained control and took the score to 12-8 and although Claudio took 2 more points, Daniel continued to dominate and take the win 15-10.

Keziah Beattie (Grosvenor) started as clear favourite, having been BO womens foil winner in 2015 and 2016,  but dropped a fight in the poules to go 2nd in the seedings behind Catherine McConvey (FLO) who had won all her poule bouts. Catherine was however narrowly beaten in the semi-finals 14-15 by Kirsten Siig Pallesen (NUIG), while Keziah cruised through her semi against Sarah Shaw (Hunterhouse) 15-3 to meet Kirsten in the final. Kirsten had won her meeting with Keziah in the poules, but the tables were turned in the final with Keziah winning 15-3 to take the BO WF trophy for the 3rd time.

Only Barry Quigley (Magee) won all his poule fights, giving him the no.1 seed position, Thomas Thompson (QUB) taking the no.2 slot with one fight lost. Nathan Boles (NUIG) and Michael Thompson (QUB) both had 6 poule wins, Nathan being seeded 3rd with a higher indicator than Michael, seeded 4th. Michael and Thomas were defeated by Barry and Nathan respectively in the semis, which led to a nail biting 15-14 win for Nathan in the final.

Emma Jane McLoughlin (Magee) finished the poule stage as no.1 seed, then progressed through to the final with a convincing win against Pollyanne Fullerton Bungay (UU) 15-6. Eile Watson (UCD) then defeated Natasha Stewart (QUB) 15-9 to take the other place in the final. The final resulted in a convincing win for Emma Jane, taking the WS trophy 15-4.

A big thank you from Belfast Fencing Club to the following people for their help in running this year’s Belfast Open.
David Connery for NIJFS DT on the Saturday.
David Connolly senior event DT on the Saturday and Sunday.
Anyone who refereed over the two days.
All competitors for taking part.
Those club members and anyone else who helped out with hall set-up and clear-up.
Sullivan Upper School for kindly letting us use their facilities.